“We have been born. We will die. In the meantime, what do we do with this life? Yoga offers us a darshana: a view or approach to engaging this question with our whole self, body, breath, and mind. Yoga teaches us that we can live in intimate relationship with all that is, and it provides practices to help us recognize and eliminate the obstacles to doing that. Religion? Maybe. For sure, yoga is goodness and beauty.” 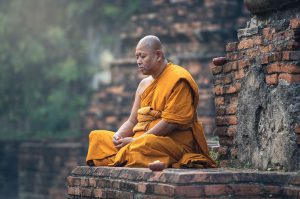 What is Yoga all About

Traditionally, yoga is the science of the whole being –  so it necessarily involves not just physical but also emotional, mental, and spiritual practices  that originated in ancient India. Its origins have been speculated to date back to pre-Vedic Indian traditions but most likely around the fifth and sixth centuries BCE.

Yoga is a means to help us understand and ultimately transcend ourselves through various supportive techniques and disciplines which include meditation, concentration, attention, mindfulness, feeling, breathing, asanas, and various rules of behavior and conduct. The different variety of Yoga Schools and practices come from Hinduism, Buddhism and Jainism. Under Hinduism, the most widely known practices are Hatha Yoga, Ayurveda and Kundalini Yoga. 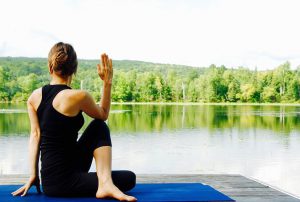 “Hatha Yoga is one of the paths that lead to the ultimate goal of Raja Yoga, or contemplation of the One Reality or Samadhi. The purpose of Hatha Yoga is to locate and activate the chakras (centers of energy), thereby raising the kundalini (dominant spiritual power). This in turn is believed to help remove blockages (disease) in the mind and body.”
— from Religion Facts

Most of the yoga forms or styles practiced in the West are variations of Hatha Yoga. Hatha simply means the practice of physical yoga postures combined with concentrative movements.

Hatha Yoga postures are wonderful as a means to align and relax your body, mind, and spirit in preparation for meditation.

Depending on where you read about Yoga styles you will find that there are many forms of Hatha yoga styles but the basic ones are Vinyasa, Anusara, Iyengar, Sivananda, Ashtanga, Jivamukdi and Yin. From these there are many variations and niche yoga styles like, acro, arial, pre-natal, post-natal, couples, SUP (Standup Paddlers), etc.

Yoga forms such as Ashtanga, Baptiste Yoga, Jivamukti, Power Yoga, and Prana Flow are all Vinyasa Yoga in that Vinyasa can be explained as one’s body-mind being presented in a particular way such as yoga poses.

Vinyasa, Yin, Bikram, and Moksha are the most widely common forms of hot yoga. There are many more that are also offered around the world given how popular hot yoga has become, but they are not widely offered everywhere.

Vinyasa Yoga is commonly taught as a sequence of poses where students coordinate movement with the breath in order to flow from one pose to the next. Vinyasa hot yoga (also known as “Flow” or “Power” yoga) is based on the Sun Salutation flow of Hatha Yoga. It’s a dance-like sequence of postures giving it a dynamic rhythm.
— Reference: Yoga Journal 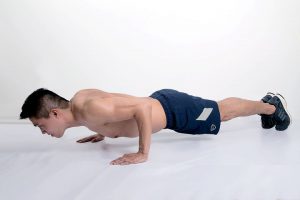 Ashtanga Yoga is often referred to as “Raja yoga” or “yoga of the kings”. “Ashtanga” means “eight-limbed yoga” or eight spiritual practices as originally outlined by the great sage Patangali in Yoga Sutras. These are:

“Ashtanga yoga incorporates the use of vinyasa (breathing and movement) and tristhana (the union of “three places of attention or action: posture, breathing system and looking place. These three are very important for yoga practice, and cover three levels of purification: the body, nervous system and mind. They are always performed in conjunction with each other”).”

Iyengar Yoga focuses on precision and the poses are held for long periods of time and with the help of props. It was founded by B.K.S. Iyengar and he designed this form of Hatha Yoga to systematically cultivate strength, flexibility, stability, and awareness. It also has therapeutic benefits. 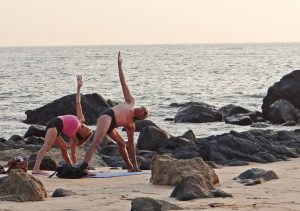 Bikram Yoga is a series of 26 postures based on Hatha asanas, it was developed by Bikram Choudhury from traditional Hatha Yoga postures. In a Bikram yoga class students hold the postures for about 10 seconds to a minute depending on the instructor and the student’s capacity.

Moksha Hot Yoga is also a series of Hatha Yoga postures with variations of each of them.

Hot Yin is a set of postures (10 – 15 depending on the instructor) that are held for anywhere from 3 – 5 minutes. It is found that holding the postures this long result in a deeper more effective release right down to the tissue and fascia, helping to restore the natural energies of the body. This form of hot yoga is considered one of the most challenging ones due to the longer time holding the postures.

Ayurveda is a healing system that is older than 5,000 years. This system is based on a holistic approach that came from the Vedic culture in India as part of a Hindu practice. I encourage you to read the following facts about this wonderful science if you are interested in finding more about Ayurveda.

Kundalini yoga is also referred as “the yoga of awareness”. Kundalini means the focus of awakening kundalini energy via regular disciplines of meditation, pranayama, chanting and yoga asanas. There is a nice write-up about Kundalini Yoga I found online if you would like to know more about this practice.